If you’re old enough to remember the classic film “Rear Window” starring James Stewart, Grace Kelly and Raymond Burr, perhaps you will understand the title of this new post. We are currently stranded in our beachfront condo due to a day full of thunderstorms, just like Stewart’s wheelchair-bound character L.B. “Jeff” Jeffries was stranded in his apartment due to wearing a cast from hip to toe.

Thankfully, there are no murders going on in Hilton Head, but in this Oceanside building resides quite a cast of characters we have observed – and listened to – who are just as quirky and eccentric as Stella, Lars Thorwald and Miss Lonelyhearts.

While sitting on the rear veranda, facing the ocean and witnessing the Atlantic’s fierce skies, the thrill of hearing the “surrounding cast” is addicting…

Below us is Unit 8104, which features an elderly couple who are currently solving most, if not all, of our world’s problems. Let’s call them Ralph & Alice.  Fix the environment? On it. Politics? Alice sounds like a Democrat and Ralph is very likely a Republican, so their martial longevity must be explained by nothing more than true love. The most pressing issue of the day is what to have for dinner, and grilling outside in a thunderstorm is NOT happening, so perhaps it’s Chinese Take Out Night for Ralph & Alice, giving them more time to figure out how they alone can defeat Isis, or determine if North Korea will ever reduce its stockpile of missiles.

Above us are the people in Unit 8304, also known as Wonder Mom and Kids. Packing EVERYTHING – toys, baby bottles, towels, beach chairs, umbrella, and snacks in a double stroller (baby included) and escorted by an adventurous toddler, undaunted Wonder Mom heads to the beach – with the sound of thunder!!! Yes, real thunder! Lightning too!! We sit, dumbfounded, at how Wonder Mom is able to push the heavy stroller onto the beach, single-handedly, and enjoy her children’s company during a storm. Then it started raining rather hard (never mind the thunder and lightning still going on), so out of fear of melting, she re-packs and swiftly retreats with children in tow. Amazing. 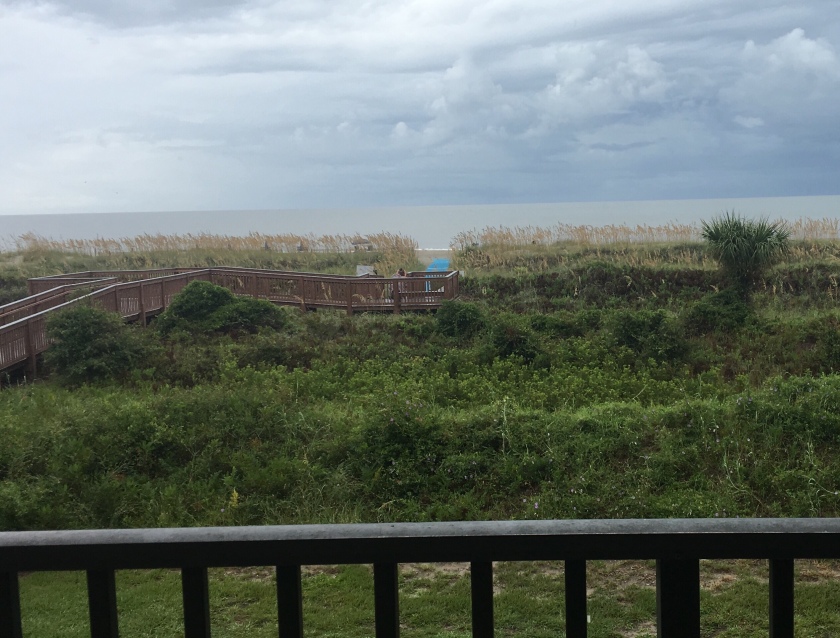 (If you look closely above, there she is in the literally thunderous, death-defying retreat)

Our neighbors to the right are in 8203, which was our original unit 20 years ago. We sold that condo to a couple for a larger one, which has 3 bedrooms and no neighbors to the left, making for a slightly more serene setting. This couple, I will refer to as Mr. & Mrs. Foster Budlight.  Whenever they chat, or whenever they don’t, the sound of clinking beer bottles fill the air. We cannot see The Budlights while sitting on the veranda, but they seem to toast to just about everything you can think of:

“My swimsuit is still wet!” (Clink)

After the rain stopped, we took our evening beach walk, and saw Mr. and Mrs. Budlight sitting on the beach, bottles in hand, although they had enough beach etiquette to use coozies. Clink. We sat on the large storage box that holds the overpriced rental umbrellas and old wooden beach chairs, and observed our neighbors. Mrs. Budlight slowly stood up, stumbled a bit and folded her chair. Sadly, she couldn’t quite make the long walk back toward our building to return it to the racks, so it was leaned rather crookedly against a post stuck in the sand. Clink.

She mumbled something to us, and wobbled over to Mr. Budlight where they proceeded to take their version of a Beach Walk…but just for fun, let’s call it a Beach Weave. It’s been kind of quiet since that evening, so one wonders if they ever made it back to Unit 8203.

There are 20 condos that face the ocean, each with its own big, boisterous family, young couple, or lonely widow, and each with their own scenes from their lives. Our condo certainly has its unique collection of visitors from 20 years of ownership and we wouldn’t trade the memories for anything. Boogie boarding, jellyfish stings, pizza ‘n’ pitch night (I still can’t play it well), ice cream trips, sunburns, cocktails and juice boxes, drying beach towels, bad joke telling, you name it, we’ve experienced it. If L.B. Jeffries was a guest here, I wonder what he would’ve thought of our neighbors, and if he’d figure out the many mysteries of the condo… 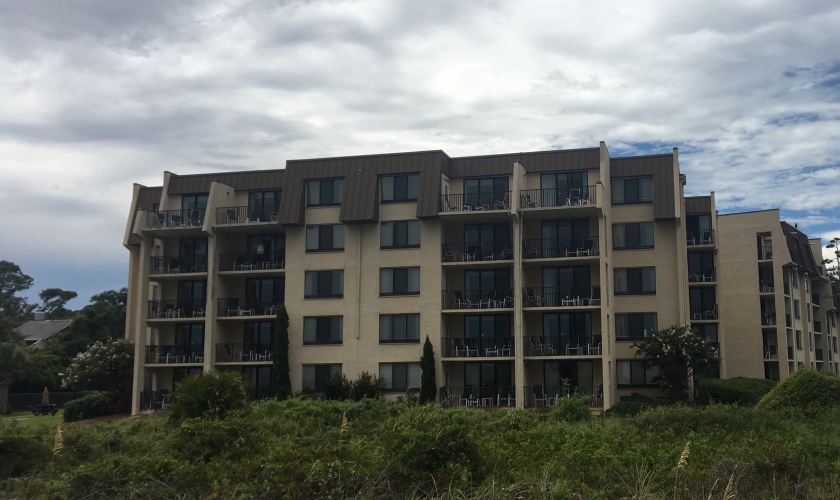 I'm a “veteran” Broadcast producer as well as a former high school and collegiate swimmer who still loves to write. I hope to inspire others to stay afloat in these often turbulent waters while enjoying some new challenges in my middle age. View all posts by sinkorswim204

“The water doesn’t know your age.”